It is likely that Edward Jenner lived in a property on the site of this house from when it was built until he married Catherine Kingscote and moved into the Chantry (now Dr Jenner's House Museum and Garden) in around 1788. 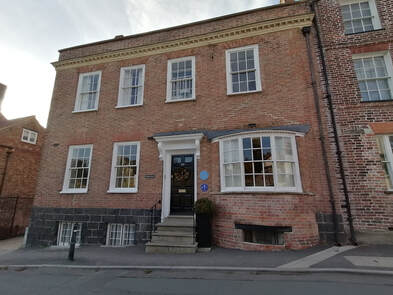 Berkeley House, 42 High Street. Image by The Jenner project 2022 | 23.
This land was leased in 1781 by Stephen Jenner from Augustus, Earl of Berkeley, for 2 pounds and 2 shillings with a yearly rental of 12 shillings.  The Lease was for 99 years and named Edward Jenner, William Jenner, and William Davis as "the other three lives entitled to the lease".  The cottage that had been on this site was then dismantled and a new “substantial and convenient” house was built, which is now Berkeley House.  At that time Stephen Jenner (Edward’s older brother) was the vicar of Berkeley and lived in the house to which this one is attached, 40 High Street.  The two houses were separated into separate titles in 2009 and are now freehold.

It was in this house where Edward Jenner developed his skills and reputation as a naturalist.  Through his observations and experiments here he discovered hibernation in hedgehogs and that it was the new-born cuckoo chick that ejected the other eggs from the nest.  It appears that Henry Jenner, Edward’s nephew, lived here after Edward left.  Henry was also a doctor and the house has been occupied by the town’s doctors right up to the 1970’s. This house was lived in by the junior partner, who was always “on call” with the senior partner moving elsewhere in the town.  The house next door (no. 40) was used as the Town’s GP surgery up until the 1970s and many Berkeley residents still remember visiting the doctor here.  Inside both houses there is evidence of the internal connections between the two.

After Edward Jenner it appears that the doctors had a tradition of joining the Berkeley Freemasons’ Lodge and both of the Henry Jenners' were members along with Dr Acheson and Dr Parkes.  The walk home down the High Street after a Lodge meeting has changed very little over the past 200 years.

​Notice the base courses in front and side of the house in the characteristic black iron slag bricks from the Forest of Dean mentioned elsewhere.

Continue down the High Street as it slopes away to the Town Boundary and cross over to the road on the left where the boundary wall ends. At the top of this road is the private entrance to Berkeley Castle and a view of the next location can be seen from the arch of the Castle Gateway through which the road runs.  Entrance to the Castle is only possible from Canonbury Street on the way into the Town. You can click the QR code on the Plaque or click here for information on Location 7.