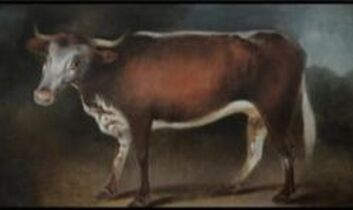 James Phipps, the eight-year-old son of Edward Jenner’s gardener, was volunteered by his father to trial Jenner’s vaccination technique in his experiment to prevent smallpox, by making a small cut in his skin and introducing pus from an infected cowpox pustule from the hand of a milkmaid, Sarah Nelmes.
She told Jenner that one of her milkers, a docile cow called Blossom, had recently been infected with cowpox. Sarah’s pustules were on the part of the right hand that handled the animal’s teats.
After a short period of a mild illness, James recovered and six weeks later Jenner tried infecting Phipps with smallpox, but it had no effect, proving his theory. And thus, Jenner started out on the road to developing a form of inoculation.

In later years in recognition of Phipps's heroic act of being the first to trial vaccination Jenner granted a free lease of the property now known as Phipps Cottage to James and his family.

James Phipps is buried in St Mary’s churchyard, a stone’s throw from the cottage. As with many burials from this time, the soft stone of his headstone has weathered away, obliterating his inscription.

​Prior to the opening of Dr Jenner's House Museum and Garden, Phipps's Cottage housed a small museum  of Jenner's life and achievements.

Turn back up Church Lane towards the Church and follow the lane round to the left. About 50 metres on the right is the entrance to Dr Jenner’s House Museum and Garden. Entry fee applies to visit the Museum and the Temple of Vaccinia. See noticeboard for opening times.