We had some really good feedback from those of the community and schools who came to our creative workshops led by  international voice facilitator Natasha Lohan, choreographer Lizzi Kew Ross and composer Liz Lane. During these events we co-created a number of poems and songs ready for the musical celebrations in 2023. We will download links to a video in due course.
​

We were very pleased to be invited to have a stand at the concert in St Mary's Church, Berkeley which featured the Cotswold Male Voice Choir and the Skylarks. Our stand will remain at the back of the church to provide information on the project for any visitors

Thank you to those who joined us for your input and offers of help.  if you  who would like more information or are interested in helping please contact us on jennerproject23@gmail.com.

We were delighted to meet many interested people at our stall at the Frampton Country Fair. 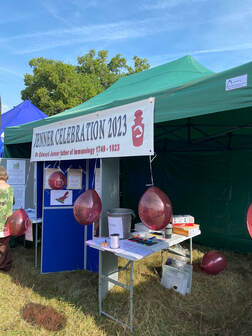 The stall at Frampton Country Fayre. image by The Jenner Project 2022 | 23.

Early on the morning of August 18th, on the Lower Lawn of Berkeley Castle, we recreated a special event in the life of Edward Jenner. His enquiring mind and continuous thirst for knowledge led him down many paths, exploring medical science, ornithology and interestingly, the new and emerging quest into humankind's lifelong desire to take to the sky's. For this event local company Exclusive Balloons supplied the balloon.

One of the lesser known facts about Dr Edward Jenner, the pioneer of vaccination, was this scientific interest in ballooning sparked by the work of the Montgolfier brothers and others.  The story goes that he launched an unmanned air balloon from the keep of Berkeley Castle in 1784, followed it on horseback until it landed in Kingscote Park which was owned at the time by Anthony Kingscote.  The village is situated on the top of the Cotswolds Edge to the east of the town of Dursley.  The landing is said to have caused local excitement in the village and when Jenner went to collect the balloon he met Catherine Kingscote, the daughter of the landowner. Their romance blossomed into marriage.
​
Below is an image of the plaque in St Mary's Church, Berkeley celebrating Jenner's marriage to Catherine Kingscote in 1788.
From there it is said that he re-launched the balloon and it flew northwards along the Cotswold Edge to near the village of Birdlip which is  just east of Cheltenham.  The public house on the junction of the A417 is named The Air Balloon to commemorate the event.

On Tuesday May 17th 2022, Dr Jenner's birthday, a Launch Dinner for The Jenner Project 2022-23 was held at The Barn at Berkeley.
The evening started with welcome drinks, a sumptuous meal followed by a talk by Professor Adrian Hill, Director of The Jenner Institute, University of Oxford.  During the evening guests listened to the premiere performance of excerpts of music by Dr Liz Lane dedicated to Dr Jenner and performed by the newly formed Jenner Community Choir, Flautist Nicola Woodward, soloist Martin le Poidevin and members of the City of Bristol Brass Band.
Professor Hill is Director of the Jenner Institute which focuses on designing and developing vaccines for infectious diseases prevalent in developing countries, such as HIV/AIDS, Malaria and Tuberculosis.  He also heads a group at the Wellcome Trust Centre for Human Genetics which studies genetic susceptibility factors for common bacterial diseases.  He is a passionate believer in the power of molecular medicine to design and deliver new health care interventions that will improve the lives of the poorest billion in sub-Saharan Africa and elsewhere. His own vaccine research programme has developed one of the most promising potential vaccines for Malaria which is currently in large scale trials in infants in sub-Saharan Africa.  In 2014 his group led the first clinical trial of an Ebola virus vaccine targeting the outbreak of Ebola in West Africa.

Expertise:Media Experience:
Professor Hill has extensive media experience, both print and broadcast and including live interviews. He has worked with local, national and international media.