Like many ‘men of letters’ and as a prominent local surgeon, Jenner would inevitably become involved in local government in his hometown and was appointed as Mayor of Berkeley, Magistrate and Justice of the Peace in 1821. The current Berkeley Town Hall is situated on the Salter Street/Market Place corner and is a beautiful Georgian Grade II listed building which has been modified during Victorian times.  In Jenner’s Berkeley there is a suggestion that the old Market House, which is likely to have been the former Town Hall, had been built across Salter Street, forming an archway somewhere adjacent to what is now the Manor House on the opposite side of the road. 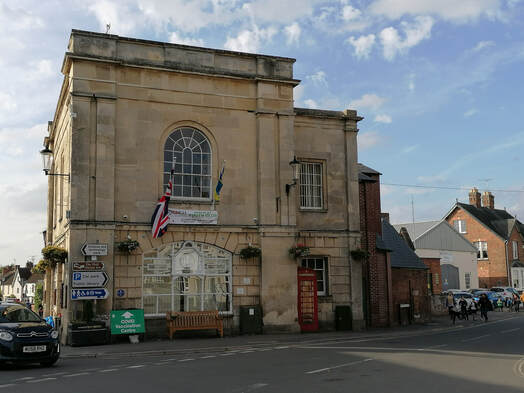 Berkeley Town Hall, image by The Jenner Project 2022 | 23
The current building is constructed of Bath stone, opened in 1825 after Jenner’s death and was designed as a Market Hall with an open lower level fitted with gates and railings, the upper storey being used as the Council Chamber.  In 1905 the rooms on the ground floor were constructed at the expense of Lord Fitzhardinge.  The Town Council still meets in one of these rooms.  It is known that Berkeley had a Town Crier until at least 1927.

Salter Street has been known by that name since the 15th century and is likely to have been home to the salt traders who bought and sold this important dietary supplement up to the late 1800s.  Towards the end of the street at the top of Stock Lane, is the former Mariners Arms rumoured to be the oldest inn in Berkeley, dating back to the 15th century.  No longer in use as a public house, it has a stone window dating back to around 1450 and a stone fireplace from around 1490.

Stock Lane stretches down to the waterway at its lower end, which runs down to the River Severn and is the site of Berkeley’s mediaeval port. Trade to and from Berkeley in the 15th and 16th century was carried out with barges of up to 40 tons bringing coal, oil, wine, and salt and some of this continued into the 19th century. There is evidence that Susan Day who lived at the Salt House, which is at the location of the wharf, was paid £752 in october 1845 by the Castle for bricks, tiles, slates coal and salt and for transporting stone and ash along the Severn.  The dairy industry in Jenner’s day was famed for its Berkeley cheese which would have undoubtedly been exported through the old port together with locally grown malt and corn.  A version of this cheese is still made by Charles Martell & Son in Dymock, Gloucestershire but sold as Double Berkeley.  Its ingredients include Annatto, an orange red colouring native to tropical America, which gives it its mottled appearance.

Interestingly, many of the houses you will visit on the Trail have very visible foundations and lower courses built with a dense, water resistant, black slag material, a by-product of the iron smelting industries across the river in the Forest of Dean, which was also imported through the old port.  Look out for these on the lower face of Berkeley House, 42 High Street; on the Cider House beside the Chantry, Church Lane and as a top course on the boundary walls of the High Street garden that lies along the private rear entrance to Berkeley Castle.  Intermittent slag blocks are also visible on the boundary wall of the Churchyard facing toward High Street.

The next building on your Trail is in High Street which is diagonally opposite the Town Hall, past the Opticians on the corner and on the right-hand side.  You can click the QR code on the Plaque or click here for information on Location 3.